These are my gleanings from the meeting held at the Barceló with ADI (Association de Desarollo Integral), SINAC (Sistema Nacional de Areas de Conservacion), CATURGUA (Camera de Turismo Guanacasteca), and MINAE (Ministerio de Ambiente y Energia). The purpose of the meeting was to discuss The Crocodile/s . I mostly went to listen, because that’s always a good start, and I got to ask a few questions. What follows is what I took away from the meeting. This is not intended to be a complete summary—I’m sure ADI will provide that. It is a subjective gleaning and contains editorial commentary and a concerted effort to minimize sarcasm.

–They carefully observed the crocodiles in the estuary after the July attack. They removed the very big one that exhibited dangerous/unusual behavior, explaining that there was only one exhibiting this behavior and it is certainly the one guilty of the attack. It was taken to Puerto Humo. (I looked it up. It’s where the Tempisque River is born. ) They are still monitoring crocodiles in the Playa Grande/Tamarindo/Langosta area and analyzing their behavior. In the five kilometer marine stretch that they monitor, it is normal for there to be 12-14 crocodiles moving around at any given time.

–It is not true that crocodiles were “seeded” here.

–Salt water crocs are completely natural in the estuaries and oceans of Guanacaste. She says they were depleted in the 40-60s, but that now their populations are becoming “healthy” again.

–Attacking/eating (presumably adult) people is not normal behavior for this species of crocodile. Nile crocodiles, she explained, eat people, but not this kind. She made a big deal about how crocodiles do not hunt people, do not want to eat people and are normally afraid of people.

–The (only) problem in Tamarindo is that crocodiles have been, for so long, fed by humans.

The SINAC guy talked too, but he didn’t say anything that stuck with me. He did take a moment to praise the fact that we have such a wonderful government system that allows us all to participate in decisions, as demonstrated by this meeting.

The meeting, by and large, revolved around how dreadful it is that we have created this dangerous situation for ourselves by feeding the crocodiles. (Which I acknowledge. Our Tamarindo crocs have twisted minds and there’s no one to blame except us.)

But ok. So we’ve corrupted the crocodile population. While we right our wrong, what’s the plan for our safety?
Signs. Signs warning people not to feed crocodiles, and not to swim in the ocean/estuary. (How about a sign asking crocodiles not to eat the people? I didn’t say that, but I thought it.) And crocodile “monitoring.”

That’s when I raised my hand. First, I said why I was there—because I happened to be a first-hand witness of the trauma caused by the attack, and I DO NOT EVER want to see anything like that again. And I don’t want you to, either. The room became very quiet. Then I asked the guy from MINAE: How are you monitoring the crocodiles? And what does a crocodile have to do in order for you to identify it as “malportado? “

They said they are monitoring the crocodiles by observing them. I was imagining chips and tracking devices, but no. That’s way too Animal Planet. “Monitoring” means that MINAE has people watching over the crocodiles. (I haven’t seen these monitors. Maybe you have?) Later in the meeting MINAE stated that they have 7 people in charge of “monitoring” 26,000 hectares. Or maybe I misunderstood that? I hope so. And a naughty crocodile, one who could get itself on the bad-boy list for possible deportation to Puerto Humo, is one that shows abnormal interest in people. Swimming near people. Looking at people. Not humbly slinking away.

MINAE wants us to report to them—that’s the most useful thing I learned at the meeting. If you see a human feeding a crocodile, make a denuncia. If you see a crocodile showing interest in humans, make a denuncia! (I’m not sure it’s called a denuncia if it’s against an animal, but you get what I mean.) MINAE says that for all of the videos on social media and for all the fussing and fuming there is about people feeding crocs, there has not ever been ONE SINGLE denuncia filed against anyone with MINAE. Which is silly. A few denuncias, a long time ago, would have enabled them to act before things turned out the way they did. Or anyway, that’s the story in retrospect. Point being: if you see any funny stuff between people and crocodiles—regardless of which species is the perpetrator—call MINAE. They’ll be right over after they finish observing the other 25,000 hectares they’re in charge of.

Other people asked questions, but I don’t really remember what they were. (I don’t advertise this a lot, but I’m actually quite selfish.) We spent A LOT of time reviewing the evils of people who feed crocs and the wonderful power of signs. Signs in red, to be specific. Red was praised. I’m not kidding. (And all sarcasm aside, red is better than the brown-and-yellow ones originally posted behind the high tide mark.)

I asked my other question to Laura The Crocodile Expert. Because I wanted someone at that table of “experts” to say it to my face. I said, “You’re the crocodile expert. You know these animals better than anyone else in this room. So tell me. Now that the big bad crocodile is gone, but knowing that there are others nearby who were certainly fed by humans, would you , if you were a surfer like I am, put your board in the water and surf in the mouth of the estuary?” Everybody laughed nervously. And Laura said, “No.” Not in the mouth of the estuary, she wouldn’t. No matter how good the waves were. That’s like chilling out on their buffet table.

People surf in the river mouth every day, and so far all of us have been safe. I didn’t say that, because she gave me her honest opinion, which is what I asked for. And she confirmed that my persisting fears are not an irrational.

Now, looking back on it, I feel a small (but futile) twinge of victory. I didn’t mean to set a trap, but if you think about it, I guess the panel of experts admitted that even though they’ve “done something” about the crocodile “problem” in Tamarindo, it still isn’t “safe.” Babies, dogs and surfers, beware: MINAE is working to protect us within the bounds of the law, but the crocodile expert wouldn’t go for a swim. 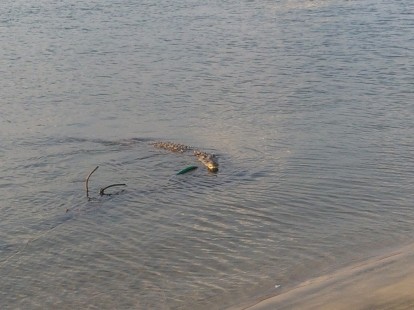 I took this photo in April 2016, of a crocodile exhibiting “abnormal” behavior–chilling there staring me down.  If it ever happens again, I will call MINAE.

One thought on “Acronyms Meet to Discuss Crocodiles in Tamarindo”

...a writer and poet who left the traditional Mennonite community of Lancaster, Pennsylvania and resides in Costa Rica.